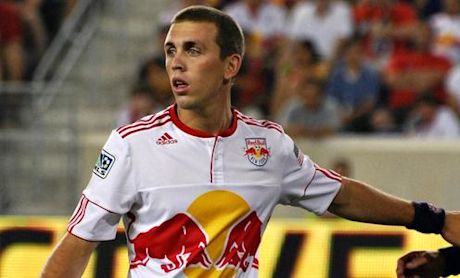 “I don’t know how important the MLS Draft is to the Red Bulls, but they do have the fattest draft book. They have certainly done their homework.” ~ ESPN commentary

Not that The New York Red Bulls needed validation from ESPN on their study habits, but I’m sure they would agree.

EXACT Sports have again assisted the Red Bulls in fulfilling their wish list. The Red Bulls knew what they wanted early on. In early meetings with EXACT, they said their most desired psychological trait was a player who will always train hard and will never give up on a game. Well, New York, Corey Hertzog is your guy.

I won’t go on and on about how he led the NCAA in scoring this year with 20 goals (a Big Ten record), or how he was a semifinalist for the Herman Trophy, or that he’s Second Team All American & a unanimous pick for First Team All-Big Ten. I’m sure there are other articles out there can tell you all about his accolades and career stats. However, this isn’t about those great things. I would prefer to talk about how Hertzog uses his head (besides heading crosses in the back of the net).

The New York Red Bulls have drafted more than just a guy that looks good on paper. They have landed themselves a 6’0, 172lb psychological workhorse. Hertzog scored very highly in “Persistence to Goals” & “Motivation.” That basically translates into someone that will never run out of fuel on his way to get to where he wants to go.  Complimenting those mental attributes are high scores in “Training Attitudes” & “Reaction to coaching.” All this adds up to a talented young player that head coach Hans Backe will most likely have a great time coaching.

There are no guarantees that Hertzog will have a standout rookie year like his new team mate Tim Ream, but all signs point to he has what it takes to be that good. Without making any lofty projections, I believe that Hertzog will have the opportunity to work hard and earn some quality minutes on the pitch this year.

Best of luck to NYRB & Corey Hertzog on the upcoming season.