Out of the thousands and thousands of high school soccer players actively playing this past winter, only 100 were named to the Top Drawer Soccer Winter 2019 All-American Watch List. Austin Yowell (2020) was one of them.

A centerback out of Scottsdale, Austin was apart of the Notre Dame Prep team that recorded 11 shutouts, a record in the state of Arizona. They went on to win the NE Valley Region Title and advanced to the 5A state quarterfinals, where they lost on penalties. Austin won 255 headers and registered 2 goals and 4 assists from his defensive position. But perhaps most impressively, he only missed 5 minutes of action the entire season.

In addition playing for NDP and the Phoenix Rising FC 01, Austin attended the EXACT Soccer Academic 50 ID Camps both in Dallas and Southern California, where he was a standout defender. He credits the EXACT Coaching staff for helping to improve his speed of play and his positioning on the field, especially Logan Emry (Portland University). Logan has become a mentor figure to Austin and they still remain in contact. Austin also believes that the mental training exercises he learned at camp (mindfulness, meditation/reflection, and goal-setting) have been vital to his development as as player. 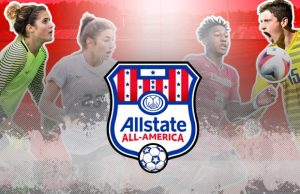 Here are Austin’s 5 tips on how to become an All-American:

Thanks for taking the time to speak with us Austin and we’re very proud to have contributed to your development. Additionally, 6 other EXACT Alumni have been named to the All-American list as well (Ben Erkens, Jose Gallegos, Dylan Studer, Terrance Wilder, Kiley Bertos, and Hannah Larson). We hope to see you all again at an upcoming camp!