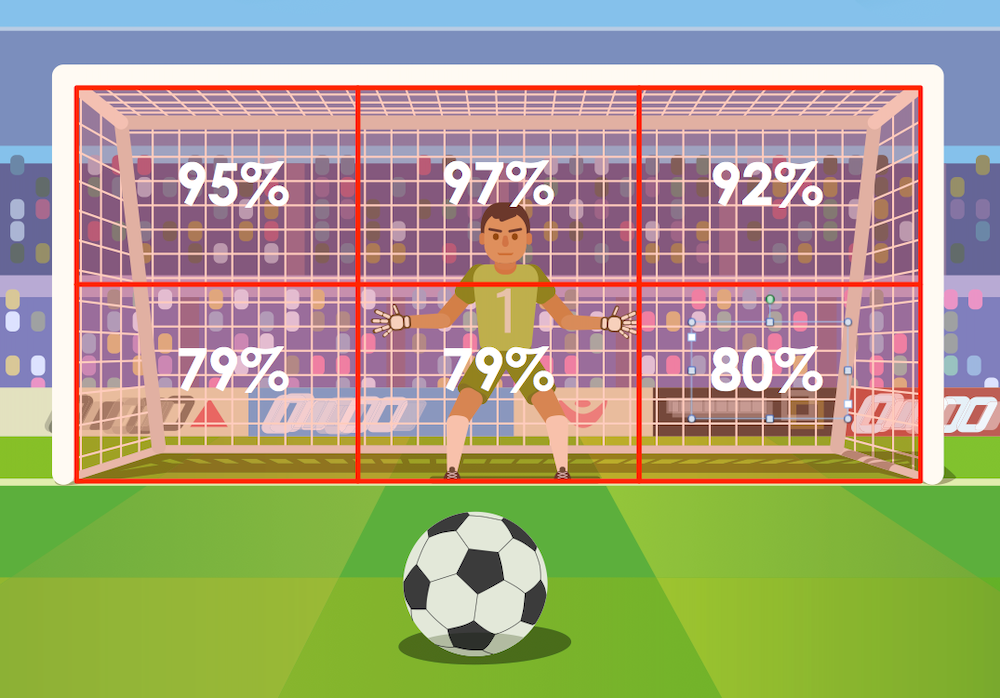 In the second installment of How to Master the Penalty Kick, we will discuss how shooters can prepare for and score a penalty kick. As mentioned in the previous article, penalty kicks are high-pressure situations and often have an impact on the outcome of the game. With the right instruction and practice, a player can become an expert penalty kick shooter no matter what pressure they’re under.

Mental toughness and coping is something we talk a lot about at EXACT. The ability to block out distractions and deal with pressure is invaluable to a penalty kick shooter. Since the goal area is 8 yards (7.32 meters) wide and 8 feet (2.44 meters) high, a penalty kick should be a fairly easy task for a shooter. And yet, almost 25% of penalty kicks in top male professional leagues are missed (McGarry & Franks 2000). What accounts for such a large percentage of missed shots? Many sport psychologists would agree that it is the psychological pressure and anxiety that the shooter experiences. Players that know how to cope with this pressure and remain confident are without a doubt better penalty kick shooters.

When top penalty kick shooters step up to the ball, I can assure you they are not thinking about the ball missing the net. They are visualizing where they want to put the ball while remaining calm. Practice these visualization techniques often – not just before the penalty kick. Always imagine yourself confidently walking up to the ball and hitting it away from the goalkeeper. Envision every detail about the kick – how you line up to kick it, how your foot feels when it hits the ball, and where the ball hits the net as it goes in. Using visualization techniques such as this will help you stay composed before the shot.

Along with the mental techniques, there is a large amount of research on the actual placement of the kick and what strategies to use. Research suggests that late alterations of kick direction increase errors and reduce accuracy (Van Der Kamp 2006). This means that changing your mind at the last second increases the chances of your shot being stopped. Unless the goalkeeper is standing considerably off-center (see How to Master the Penalty Kick Part I), don’t deviate from your original plan. A study by researchers at the University of Exeter (UK) also found that when anxious, a player will tend to fixate on threats – the goalkeeper, in this case – and shoot it right at them (Wilson et al 2009). “Research shows that the optimum strategy for penalty takers to use is to pick a spot and shoot to it, ignoring the goalkeeper in the process,” says the study’s author.

In addition to psychological pressure and shooting technique, you also have to be mindful that a goalkeeper will often try to read your body language to get a better idea of where you’re shooting. There are a couple of “tricks” that many elite players use to deceive the goalkeeper during a penalty shot. First, a goalkeeper will watch how you line up to kick the ball. Usually, a player who kicks with their right foot and lines up diagonally-left of the ball will shoot it across their body (left side of the net), and the opposite is true for a left footed kicker. To take this advantage away from the goalkeeper, try lining up directly behind the ball. It will take practice to get the power and accuracy, but will put the goalkeeper at a disadvantage. Goalkeepers will also look at your eye contact with the goal. Try to take short, brief looks at the goal – a long stare will help the goalkeeper guess where you are going as well as distract you. Even if the goalkeeper reads your body language and guesses right, most coaches and researchers agree that a well hit shot to the top and bottom corners are almost impossible for a goalkeeper to stop.

Using these tips and strategies will help you tremendously during a penalty kick, but in the end, practice is the most important thing. If you want to increase your success rate, take time everyday to practice your kick as well as your visualization skills. Practicing your mental skills and shooting techniques will help you become more confident and versatile when the game is on the line.