I recently had the opportunity to sit down with Hayley Hughes, a junior forward for the Cornell Big Red Women’s Hockey team. Hayley, a psychology major, managed EXACT’s Neurocognitive Testing Station at the recent NHL Draft Combines in Toronto.  Cornell Big Red women’s team had a tremendous season this year, losing the NCAA Championship game in Triple OT to the UMN-Duluth Bulldogs. I asked Hayley a number of questions regarding life as a college student athlete.

Mentally, how challenging is the college hockey season?

There is so much more that goes into hockey than just playing the games. You have to be prepared in every aspect of the game. Whether it is nutrition, skills, or fitness, your mentality is what drives you to do well in all of these areas. Therefore, mentally, the college hockey season is very tough considering you spend so much time preparing for a limited amount of games. You have to be ready for each one, and that means being ready for every game and practice and dealing with the distractions of the college life.

How do you balance academics, hockey, training, and friends?

In college hockey, you have to learn to make sacrifices. As NCAA athletes, we do not get to have the typical college experience. Primarily, I am going to college to get a good education. As much as I love hockey, my academics are very important to me. It took some time, but it was mainly through experience that I have learned the proper way to manage my time. I am able to stay caught up in school in order for me to truly focus on training and hockey when the time comes. Unfortunately, this sometimes means I am sacrificing some of my social life. However, the team knows that we are all here because we love the game, and if that means sacrificing a few nights out, we are willing to put that aside to play.

Describe your team last season, and what were the key qualities of your team that allowed you to defy the odds and make it to the NCAA Championship game?

I think one of the most important things about our team last year is that even though no one expected us to be a challenge, we had no doubt in our minds that we could be the team to beat. Right from the start, my coach set goals for our team that involved winning everything possible. It’s hard to explain, but when I looked around the dressing room I could see it. I could see a team that was willing to do anything to win. Besides believing in ourselves, another very important quality I felt we had was team cohesion. We were a small team and we knew we needed everybody to bring their best game in order to succeed. In that sense, we were hard on each other, pushing each other to be better. Negativity was not tolerated. You cannot have one single player who doesn’t want to be there, who doesn’t want to put forth every effort possible, because if you do the whole system breaks down.

How would you describe the experience of the frozen four, and in particular going into 3 OTs for the final game?

The frozen four was such an amazing experience. For me, it felt like it was our Stanley Cup playoffs. It’s hard to explain a feeling like that. Everyone was ecstatic and energetic because we knew we deserved to be there. Nothing else mattered that weekend. It was like hockey was our life and our only job, which we all agreed was one of the best feelings we had ever felt. I think one of the biggest differences at the frozen four compared to regular season was the advertisement and promotion of the weekend. I think it’s great that we had conferences, media coverage, and things like custom-made shirts and posters because it really helps the promotion of women’s sports. Again, that ties in with the feeling that we were part of something really spectacular and I am very thankful my team was able to experience it.

What did that final game bring about physically, mentally and emotionally for the team?

My team was definitely pushed to the max physically, mentally and emotionally. In a game that lasts 3 overtimes, it is obviously physically strenuous. Playing two games of hockey back-to-back would be strenuous for anyone. Although we were a physically prepared team, I think we all knew that we had run out of gas, as had the other team. In my opinion it really hurt our team because we aren’t the most skilled team in the league. We do have a lot of skill, but most of our successes have come from second efforts and out-working the other team. Mentally and emotionally, our team was tested. When you are physically exhausted, you become irritated and agitated. However, instead of doing that, from what I heard in the dressing room the team was doing their best to keep their cool. Again, we had focused on positivity all year as we had a small roster and we knew we needed everyone. I think all of these combined things made the loss that much more disappointing. We had given everything and were strained in all aspects, and we felt like we were left with nothing. But despite the loss, we had lost together. We can honestly say that this team stuck together all year, and what we accomplished really made history at Cornell.

You mentioned being injured over the last games, how hard was it to sit there and watch your teammates and not be able to help them out on the ice?

I think the feelings experience while playing during a game, and the feelings experience while watching your team play is entirely different. In a game you are nervous, but it allows you to find motivation to get excited for the game and pushes you to want to affect the game somehow, whether it be pumping up your teammates or making a great play. However, from the stands it’s an entirely different feeling. The lack of control is really the worst part of it. You’re nervousness just keeps growing and growing and you have no way of getting rid of it because you cannot go out there and do what you think needs to be done. Also, not being able to play in the most important games of our season was just heart-wrenching. I had done my best to help the team all year to make it where we were, and I couldn’t help them finish the job. They did so well though and I am extremely proud of every one of them.

What are your summer plans to help you get ready for next season?

As I said before, playing hockey at an elite level really requires some level of sacrifice. This means sacrificing some of the relaxing and social areas of my summer. I currently work 9-5 Monday through Friday at a gym, where I also workout five days of the week. With the help of a summer program provided by my team’s trainer, I am focusing on weight training, cardio, and agility to get as prepared as possible for pre-season training and practices. The atmosphere at the gym I go to is great because it consists of mainly hockey players and other athletes which really helps me push myself to become better and stronger. Although I do plan on getting on the ice, it will not nearly be as often as my off-ice training. Also, individually I like to focus on things I think need improving. For example, for me I really would like to be more of an offensive threat next year. Therefore, I want to work on my supper body strength to make myself a more dangerous shooter, and my core strength to make myself harder to push off the puck, and my agility in order to be able to move quickly out of the corners and into the slot. Although it is hard work, I love how it makes me feel. Finally, nutrition is so important. In order to get the most benefit out of my training, I have to be eating the proper meals. I get as much advice as I can from my trainer at school and at home, and also from other athletes, in order to try and tailor my diet specifically to me. A successful season starts in the summer.

Describe your experience at the NHL Combines.

Being able to witness the 2010 NHL combine was a great experience. Although young, the players at the combine had been preparing a long time for these tests and it really showed that weekend. Each player went through a series of tests, some more strenuous than others, but I felt they were all mentally challenging as there was a lot of media and scouts keeping a close eye on all of them. After tests that measured their strength, explosiveness, agility, and balance, each player was pushed to the max in Wingate test and the VO2 test. In my opinion this is where the players were really tested for their physical preparation and mental toughness. As part of the EXACT Sports team that weekend, I assisted with the psychological testing station as an intern. After a very tough VO2 test, the players came to my station, where I administered to them a spatial orientation awareness test, to test their ability to focus during exhaustion. The professional and exciting atmosphere that I worked in that weekend really made for an amazing couple of days and also helped me to gain experience in the professional field. It really combined my love of sports and my interest in psychology. Furthermore, it enabled me to apply my knowledge while also gaining some from the professionals in the business. I truly gained insight into the hockey world and the field of sports psychology and I have EXACT Sports and the people running the 2010 NHL combine to thank for that.

Mental and emotional preparation, time management, and understanding the importance of balancing hockey, academics, and friends are essential qualities for becoming a capable student athlete at the college level.

Of note, Edith Zimmering, one of Hayley’s assistant coaches at Cornell University, will be instructing at the upcoming National College Development Clinic in Montreal over the July 3-4 weekend. Coach Zimmering brings a wealth of goaltending expertise and will work one-on-one with the goalies over the course of the camp. Any hockey players that have an interest in working with some of the top Division I and Division III coaches, should check out the EXACT Hockey website. 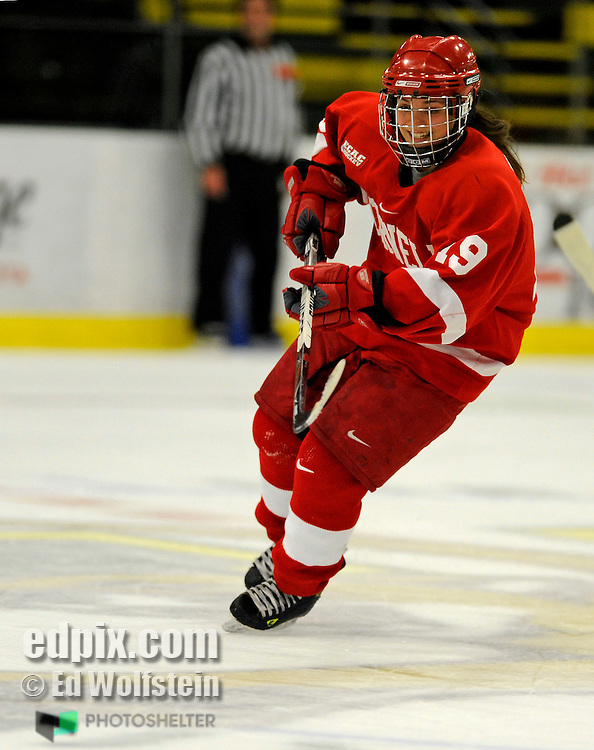