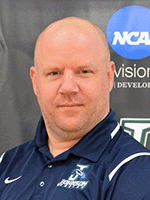 Lafrenz led his group to progressive improvement in his first season, culminating in a thrilling double overtime victory over SUNY Canton in the season finale.

Prior to returning to his alma mater, Lafrenz had a successful six season stint at Newbury College in Brookline, Massachusetts, compiling a 39-69-5 (23-19-2 NECC) record to become the program leader in career victories. He guided the men’s soccer program to new heights with appearances in the NECC title game in two of his final three seasons. In the 2013 season, Lafrenz was named the NECC Coach of the Year while leading the Nighthawks to their first conference title game appearance in program history.